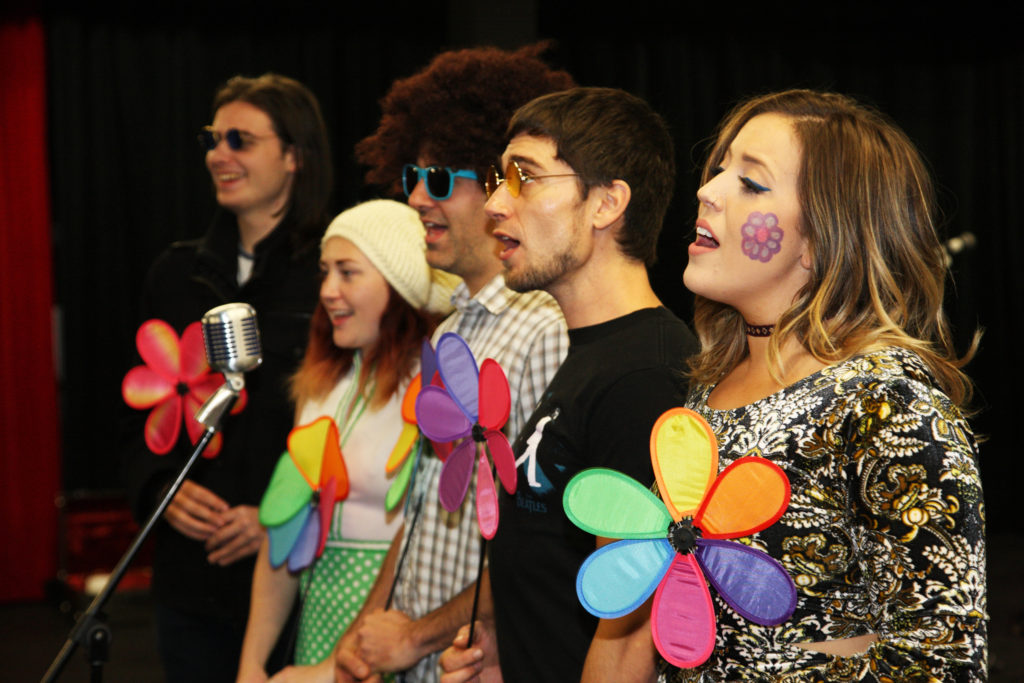 The terrific cast of The Time Machine takes us back to a hippy-dippy era.

Oh, what a feeling. What a rush!

We’d expect nothing less, since this show — conceived and directed by Harley Hay — is rooted in nostalgic songs from 1965 to ‘75.

More than two dozen timeless tunes were performed with an infectious sense of fun by a cast of five singers and six musicians. The songs were strung around a very loose story line about a guy and a girl who meet, fall in and out of love.

There’s no dialogue, apart from narrator Ryan Marchant (from the band KlamDaggers) making such trippy pronouncements as: “Sometimes it takes a little falling-out to fall back into love, like, for real, man, like forever…”

Marchant modeled extreme hairstyles from the era while performing funky versions of Stevie Wonder’s I Wish, and Jackie Wilson’s Higher. His performance of That’s the Way I Like It was sung with synchronized moves with backup singers, Laren Steppler and Michelle Colby (choreographed by Elisa Nixon).

Colby delivered Lady Marmalade while sporting gold lamé bell-bottoms. (Did they glow, or was that reflection from the disco ball?) And Steppler managed to sing, dance — and play a honking big saxophone — without missing a beat.

But the most memorable moments came from Baynes and Williams.

Baynes’ voice is tailor-made for rock opera, as shown in his searing versions of Foxy Lady and One is the Loneliest Number. Williams performed a haunting rendition of Sound of Silence and brought down the house with her incredible delivery of Somebody to Love.

The singers also nailed their duet of (The Jackson 5’s) I Want You Back.

My one quibble was with many voices vying for dominance on ensemble numbers, such All You Need is Love. More back-seat harmonizing would have been nice. But it’s a small point in an otherwise terrific show.

Kudos also go to the amazing band that enjoyed every moment: music director Morgan McKee (sax and keyboards), Dave Parfett on organ, Hay and Rob Goodwin on a multitude of drums (and did I hear cow bell?), Jeremy Doody on guitar, and Scott Wiber on bass. Larry Reese also lent a very cool ’60s vibe with his sitar intro.

For a groovy blast from the past, check out The Time Machine until Nov. 12. (Tickets from bullskitcomedy.com)